In addition to my 20+ years as a foster adoptive parent trainer, I’ve been given many opportunities to speak at conferences, Mother/ Daughter Teas and other events over the years. One of my presentations is called Hospitali-TEA.

Even as I’m nearing the grand age of 60, I’ve never enjoyed drinking coffee. I have had two or three cappuccinos, and they were OK, probably because of the sugar and other flavors added. I’m just not a coffee fan. I’m a tea drinker. I’m not a tea snob, but I do know how to do it right.

Most mornings I slip a tea bag into a mug of water and microwave it until it almost boils. I’ll admit, that’s not the proper way, for a number of reasons. Please see the link below for great instructions for making a proper cup of tea. Some rare fine days are china cup and saucer sit and ponder days, but truthfully, most of my days are three mugs of tea, microwaved, consumed while working.

I started collecting tea cups as a child because they were given to me by my grandmother and many “older” friends and family members. I expanded my collection during our honeymoon in Canada when I had access to so many fabulous Royal Albert patterns. I have a few Russian Lomonosov porcelain tea cups and one beautiful Lomonosov teapot. The Lomonosov porcelain factory dates back to 1744 in St. Petersburg, Russia. It was their first porcelain company. These stunning bone china designs, some shown above, typically have a brilliant cobalt blue and white pattern, accented with gold. The tea pot is especially impressive. However, did you know that Lomonosov china is not the best vessel for tea? In spite of its rich history, high price, and great beauty, it’s just another teapot. 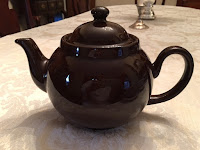 Tea was very symbolic during the reign of Queen Victoria. Everyone owned a teapot, even if it was a very basic vessel for preparing tea. The plain, humble “Brown Betty teapot” pictured on the right was a heavy favorite. In the early 1700’s this small, seemingly unattractive, unglazed teapot was a luxury item. Brown Betty teapots, now glazed, are still produced today,  and most tea aficionados consider them the premium teapot for producing a proper cup of tea. It turns out that between the clay, the glaze, and the short squatty design, this not-so-attractive teapot is said to give the “perfect” cup of tea. The shape of the pot allows tea leaves to be gently swirled as the boiling water is added, producing an “exquisite infusion.” Who knew? The plain little boring brown teapot outclasses and outperforms the more expensive beauties that surround it.

If I was shopping for a new teapot, it’s much more likely that I would be drawn to, and want to purchase, an attractive Lomonosov teapot, based on the brilliant blue and gold outside appearance. Isn’t that how we are? Don’t we often judge things by how they look? By their outer appearance? If I even noticed the Brown Betty at all, I’d probably judge that since the design was so basic and the price was lower, the plain Brown Betty was of lesser value. I’d be wrong. The Brown Betty has great value that is often overlooked.

I’ve come to realize that I sometimes judge people based on how they appear, i.e., how they’re dressed, their hair styles, their shoes, their tattoos, the personal accessories they choose, etc. Maybe we all judge people that way. Do we keep walking rather than stopping to chat? Do we brush past without considering another’s value? How often have I missed the opportunity to get to know someone because he/she didn’t quite line up with my idea of the way someone should look? It’s just like in the Hallmark movies… sometimes the worst dressed person (in our perception) is the hardest worker, the Brown Betty. How many times have I hurt people because of my judgments and my actions?

Let’s all be more aware of our attitudes toward others. With awareness comes responsibility. Let’s model our conduct on the best teacher of all. I Samuel 16:7 (NKJV) But the Lord said to Samuel, “Do not look at his appearance or at his physical stature, because I have refused him. For the Lord does not see as man sees; for man looks at the outward appearance, but the Lord looks at the heart.”